Halloween is thought to have strong pagan beginnings, it has also been linked to the Celtic festival of Samhain, this was a time of communities preparing for the winter months, and people’s thoughts focus on the supernatural. At this time the Irish built bonfires where they invoked the help of the gods, they sacrificed animals during their rituals, and possibly there were human sacrifices. The pagan origins of Halloween come from symbolic practices and are remembered as a time of supernatural energies denoting winter’s beginning, it was also a time when the souls of the dead would revisit their old homes to find comfort by their hearths and enjoy the atmosphere of the home. In Celtic lore winter was considered the dark time of the year, while summer returned to the underworld.

During Samhain, elves and fairies appeared and the boundaries between the real and the otherworld were blurred. Samhain was a moment where time stood still, making way for ritual transition and altered states, a period of time when the universe’s normal order is suspended and all is charged with supernatural energy. These energies permeated all things throughout the Halloween celebrations. Although Samhain imbued Halloween with a supernatural charge, the only ritual associated with it was fire rites.

Bells were rung all night in churches in preparation for Halloween, this was done to ward off demonic spirits and there were certain church rituals associated with Halloween. In England bonfires were built in graveyards to ward off malevolent spirits, a practice called souling began during the celebration of Halloween. A custom was followed whereby bread and soul cakes were baked and the food was distributed amongst the poor. Souling involved a ritual where people went from door to door asking for food in return for prayer, the soulers went from door to door with candles placed inside hollowed out turnips. Souling survived in northern England in Lancashire and Chesire, on Halloween it was known that there was an increase of supernatural energy.

In Lancashire it was believed that the spirits of those who were to die the following year would appear in bodily shape during Halloween. In other parts of the country there was a custom followed, 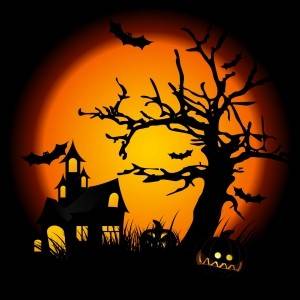 described as driving out the witches, candles were lit to ward off evil spirits. Candles were carried about during the hour before midnight, if the candles burned continuously during the witching hour, the one carrying the candles would then enjoy immunity from witches for the following year. Halloween was also a particularly important time for divination, and a woman born on Halloween was said to possess supernatural powers, and a unique ability to foretell the future. All people believed they had a heightened sense of intuition during Halloween, due to the energies during that time.

The impending death of friends, neighbours or family could be learned during Halloween if a shadowy shape was glimpsed in the churchyard, or when an egg white was dropped into a glass of water and a shroud was detected, death was imminent. Young women in England placed a sprig of rosemary under their pillow on Halloween allowing them to dream of their future husbands. They would also throw a ball of wool through an open window at midnight, and whoever picked up the wool and whispered his name would be her future husband. During Halloween the profession of a future husband could be divined by running molten lead through cold water. The fidelity of lovers was accessed, or marriage prospects, by the way nuts popped in the fire, if the nuts stayed together, the lovers would prosper, if they flew apart, the lovers would also.

During the seventeenth century onward, everything associated with Halloween flourished, and did so with very little church intervention. In Scotland Halloween bonfires blazed, the ashes later used to create magical circles, people then danced around these circles.

Halloween continued to be associated with the supernatural in England, and even when the fearful superstitions of witches was not so intense, people still wore masks and dressed up in costume. Dressing up remained an integral part as did visiting a neighbour’s house on Halloween, during the Scottish festive cycle.

Those driving on Halloween were told to drive carefully, so that the roaming souls had time to get out of the way. The Scottish blessed their fishing boats on Halloween by marking them with a cross, the tricks that originated from Halloween showed a way of mimicking the malevolent spirits who were said to be abroad on Halloween. Items were often stolen from people during this time, and revelers sought out single women who they hazed and labeled as witches.

Young women were masked on Halloween, it was also an important time for male bonding, although most of the rituals focused upon the desires of young women, especially as a courtship or 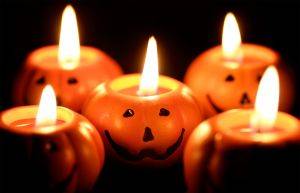 pending marriage ritual. The way nuts cracked or stones settled in bonfires, the people or sounds encountered at the midnight hour, all related to the future in a divinatory manner. Deaths were also foretold, although the main ones were on relationships and marriage prospects, who, when, where, how old, what type of profession would they have. Many spells were cast at this time to gain some insightful details about a person’s future partnership, spells were also cast for secrets to be revealed.

In Britain the Halloween meal often featured, grain based products, fruits, potatoes, cabbage, apple peels were used to divine the future relationship by revealing the first letter of the future spouse’s name. Nuts were burned at the fireside to discover whether relationships would end up at the altar.

Halloween in Britain depended on the strength of oral tradition and religious culture, North America carried on the practice to a greater degree, it continued to be related to the supernatural. It continues to be a time of costume and celebration, and is particularly geared towards children.

In the past Halloween was called Hollantide in Holland, and Halleve in Northern Ireland, in County Connaught and County Kildare it was known as Puca Night. Halloween was diligently observed throughout the nineteenth century and into the twentieth century. During the time of Scottish and Irish immigration to North America, the tradition of Halloween retained a strong tradition of costumes, masks and pranks, with an overwhelming supernatural intensity. The focus remained on rituals aligned to the direction of relationships and their future.

The tradition of Halloween took root in America in the nineteenth century, the vast amount of immigrants from Scotland and Ireland assured this. During the nineteenth century the Irish immigrants gathered on Halloween for games, and to reenact the divination practices of those before them. They dressed up and wore masks, festivities and dancing took place in people’s homes. Halloween became a more commercial venture, and where to purchase Halloween masks was advertised in the local paper, the want for masks was overwhelming. Foods such as pecans, almonds, walnuts, Brazil nuts and chestnuts were sold in copious amounts, and by the end of the nineteenth century the celebrations expanded, figs, raisins and grapes along with seasonal apples, chocolate and ice-cream, were sought after.

In the nineteenth century Halloween was presented in the form of pictures, they depicted families celebrating Halloween with relatives and friends, a well-dressed woman was presented roasting chestnuts, or placing two nuts together to see how they would react, the woman’s two daughters and husband looking on. Two ladies in the background of the picture are seen entertaining guests by divining the future, one is using cards the other with egg white. In the foreground of the picture a boy is offering a girl a chestnut, behind them a group of boys and girls are dunking for apples. It is showing an atmosphere of culture, and the time-honored customs within people’s homes. Another picture depicts a young woman viewing her reflection in the mirror, searching for a peak of her future husband, she shows indifference to the aged would be suitor whose reflection looks back at her. There is also a depiction of people having fun at a party,playing musical chairs and other lighthearted games.

The making of lanterns made from vegetables hollowed out, was adapted from the custom of carrying hollowed out turnips, representing the souls of those departed. The custom of costumed and masked revelers visiting homes to solicit gifts continued. in centuries past special license was given to revelers to have fun and be joyful on Halloween. On occasion in the nineteenth century, the less well behaved revelers found themselves in court facing a fine.

The students of a New York university in the nineteenth century marked Halloween as a time to haze freshmen, these rituals began to dissipate in the twentieth century. Halloween continued to be celebrated more elaborately in America than in Britain. An instructional book describing how to celebrate Halloween suggested that, bats, black cats, witches and ghosts dominated.

By the twentieth century there were numerous ways to celebrate Halloween, it took place in schools, town halls, hospitals, country clubs, art galleries and hotels. For the theater goer there was 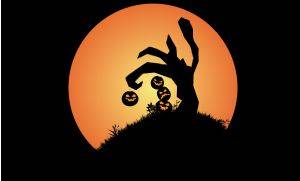 always a Halloween performance to be seen, and it was a boom time for shop keepers. There was some concern at this time as to the behaviour of teenagers and the things they got up to, their younger siblings behaved appropriately, dressing in costume and visiting houses to ask for treats. The older youths became too raucous and caused damage to homes and property, they tampered with traffic signals, deflated tires and were generally committed to causing chaos. It was this chaotic behaviour that led to clubs and societies to provide venues and events to assure more dignified celebrations, assuring safer Halloween practices. Halloween street fairs, carnivals and parades were organised, this was a way of diminishing the vandalism, and the organised gatherings led to trick-or-treat. Trick-or-treat originated in the early twentieth century and gained momentum by the mid twentieth century, thus a much loved Halloween ritual has continued.

Halloween became an important night for manufacturers, selling chocolate, nuts and various other sweet treats, it also became a lucrative time for costume makers, Halloween also became linked to charity and trick-or-treaters collected items for those less well off. UNICEF eventually became involved and through their charitable activities, large sums of money were raised for the needy.

Halloween was embraced by Hollywood and a number of scary movies have been made and become part of the yearly celebration of Halloween, for horror movie plots Halloween is the most popular, possibly because of the association with the supernatural. Halloween is also a time for revelers to call attention to a range of causes, many political and social causes are highlighted on Halloween. Halloween has been used to broaden social consciousness, although humour and a sense of play seem to be the dominant factors these days.

These days Halloween is predominantly a children’s celebration, where they can dress in whatever costume they choose and go house to house in groups to ask for sweet treats, Halloween has lost much of its historical, traditional and supernatural significance. Many homes look at it as a time for family to gather together and enjoy each other’s company, or to have Halloween parties. How Halloween is celebrated is up to the individual, it can be a time of fun and closeness with those you love, or it can be a time when you contemplate the historical references and beliefs and the evolution that has taken place regarding its recognition. The individual will celebrate depending on their religious, emotional and moral beliefs and it really is a case of to each his own. 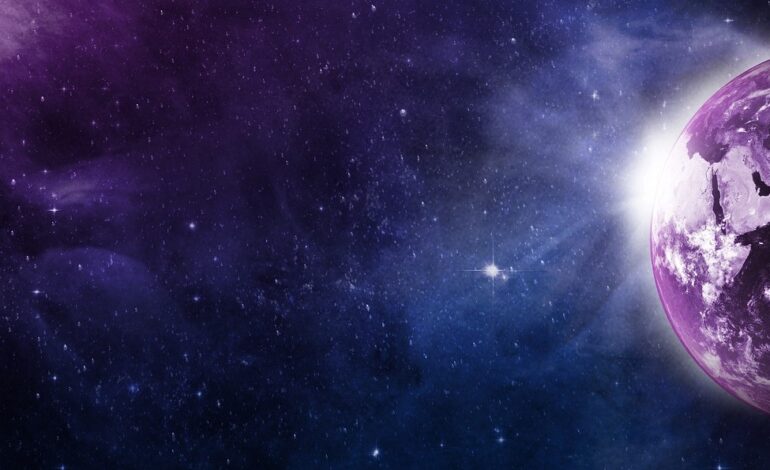 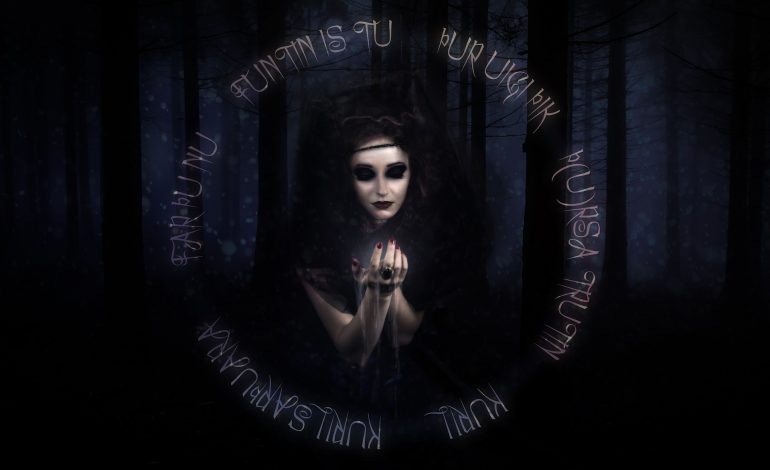