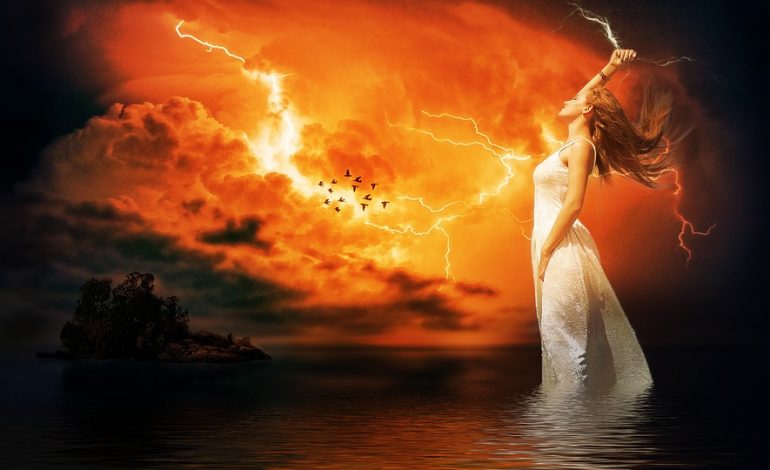 We are surrounded by magic, it’s just a matter of tapping the energies available as they float around us. When spellcasting you can summon the goddess energy. Divine ancient goddess energies will activate the loving energies within you and your partner, or your desired partner. Witchcraft is the unleashing of magical power, spells can be enhanced by using the energy exuding from crystals, statues, gods, goddesses and all manner of magical beings.

Before you begin spellcasting, gather all your magical implements, tend to your environment, light candles, incense, surround yourself with crystals, statues of gods and goddesses. Charge your cauldron, energise your wand, awaken your altar, these touches help to open the doorway to other dimensions.

Once the incense is burning, the candles lit, fragrant oils filling the air, place all your magical items on the altar, this is your sacred space, you are preparing to summon the goddess energy. Otherworldly energies begin to swirl as you prepare to spellcast and open a connection to the Divine, this is where Earth meets higher realms and forms a conduit. Stand in front of your altar and feel yourself detach from your day to day trammels, be open to otherworldly elements. As you stand in your sacred space absorb the magical energies surrounding you, breathe in the Divine energy.

To successfully spellcast, a certain formula is necessary to ensure magic that will bring the desired results, your three steps are; intention – desire – merging.

What is your intention?

What do you want to achieve from your spellcasting?

What kind of love spell do you want to create?

(1) Intention: Create your cone of power, think clearly about your intention and expectation, be clear and sure that this is what you want.

(2) Desire: You must utterly want your spell to work and absolutely have the ardent desire to attain what you wish for.

(3) Merging with the Divine: The third step is the most important, this is where you open up to the Divine, feel the flow, believe it is there for you.

Belief is the most important component when spellcasting, it is the ingredient that makes magic happen.

Spellcasting is more potent at night when the lunar energies are at their strongest, most Witches spellcast by the light of the Moon, psychic energies are elevated at this time. The ancient 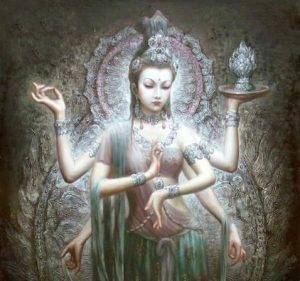 apothecaries and alchemists liked to work by the light of the Moon, mental and mystical portals are open and receptive.

When casting love spells, use coloured candles associated with love, surround yourself with rose quartz crystals, use rose oil essence. Create a passionate and sensual atmosphere. Now is the time to communicate with and summon the goddess energy to intensify your spell. You are calling upon the ancient knowledge of love, passion and sensuality, the goddess carries within.

Invoking the goddess energies helps you to tap the goddess within, all witches are goddesses and this power aligns you to the Divine. The powerful goddess entities Aphrodite – Venus – Freya, Invoked when you are spellcasting will charge your spell with their particular energies, ensuring your spell will be potent and successful.

When summoning the goddess further intensify your magic by using a rose quartz crystal, the gentle energy of the rose quartz enhances love magic. Rose quartz is the crystal associated with the love goddess Venus. Rose quartz promotes loving energies, it is the stone of unconditional love, it balances emotions, it heals rifts, intensifies passions. Place a piece of rose quartz under your bed to harmonise your relationship, use a rose quartz crystal, along with the invocation of goddess energy. The energy of a love crystal can help you and your paramour open your hearts to love and bring more passion, sensuality and romance into your life. Crystals can awaken the erotic energy centers in your body and help create an aura of sensuality.
Choose the love goddess energy you wish to Invoke – Aphrodite – Venus – Freya;

Aphrodite was the Greek goddess of love, beauty and fertility, not only this she was the goddess of sexual love and she assisted mankind with the affection that sustains social life. Aphrodite’s father was Ouranos, she married the Greek smith god, the crippled Hephaistos. Aphrodite was not a faithful wife to the crippled god, not content with one man, Aphrodite bore children by Dionysus, Ares, and several other gods.

Upon finding out about Aphrodite’s affair with the war god Ares, the furious smith god made a mesh of gold, he used this to catch the lovers in bed together. In an attempt to shame the lovers, he called the other gods from Mount Olympus to see them together. The gods were amused and laughed at Hephaistos. The god of the sea Poseidon, managed to convince Hephaistos to release Aphrodite and Ares.

As punishment for her unruly behavior the powerful sky god Zeus, made Aphrodite fall in love with Anchises who was the father of Aeneas. Aphrodite helped to cause the Trojan War by ensuring that Paris, son of Priam the king of Troy, declare she was the most beautiful of all the goddesses. Aphrodite did this by, promising Paris the hand of the most beautiful woman in the world, Helen, Helen was the wife of the king of Sparta, Menelaus.

Venus (Greek: Aphrodite, Babylonian: Ishtar), was the Roman goddess of love, beauty, the sea and agriculture, she was patroness of gardens and vineyards. Charged with the protection of the chastity in women and girls. The planet Venus is one of the brightest planets known to the ancients. It is the second planet from the Sun, the most brilliant object in the sky. Venus was worshipped on the islands of Cyprus and Kythera, Venus was the daughter of Jupiter, two of her lover’s were Vulcan and Mars, and like Aphrodite, Venus had many affairs. She had romantic liaisons with gods and mortals. Venus was likened to the goddess Aphrodite, and became identified with many foreign goddesses. Venus was a daughter of Dione, wife of Vulcan, and the mother of Cupid. Venus was the patroness of the dictator Sulla, she was named an ancestor of the (Iulian) family of the emperor Agustus, and Julius Caesar. Caesar introduced the cult of Venus Genetrix, the goddess of motherhood and marriage, he built a temple on her behalf in 46 BCE. She was honoured in the temple of Mars Ultor. The emperor Hadrianus built the last great temple of Venus, in 135 CE. The oldest temple of Venus dates back to 293 BCE, it was inaugurated on August 18. The most famous representation of Venus is the statue, known as the “Venus de Milo” (c, 150 BC), and the painting “The Birth of Venus”, by Sandro Botticelli.

Freya (Lady), Norse goddess of love, magic, divination, sensual love, beauty and destiny, she assisted in all matters of love, she was a warrior goddess, a Valkyrie. As a leader of the Valkyries, she was very powerful, and with this power she could claim half the souls of the bravest warriors who died on the battle field. Freya would pluck the men from the battle field, taking them back to her home where they could spend the afterlife in rest and recreation. Freya’s kindness extended to the warrior’s wives and lovers, inviting them to come and live in her home. Freya was the daughter of the god Njord, sister of Freyr and she had many lovers, her lovers were giants, dwarfs and men. Through her romantic liaison with four drawfs she managed to acquire the Brisings necklace. Although she had numerous lovers, Freya was married to the Norse god Od. The flickering light known as the Aurora Borealis, was said to be the light reflecting from the armor Freya and Valkyries wore as they rode forth on their mission.

Freya was distraught when Od disappeared, all thought he was dead, possibly killed by ruling deities for disobeying their orders. She cried tears of gold, and refusing to believe he was dead, Freya donned a magical cloak of falcon feathers, allowing her to fly across the sky to search the Earth for her husband.

Od had been banished and lost at sea, by the time Freya found him he had already turned into a sea monster, as frightening as his appearance was, Freya stayed by his side to comfort him. Od was killed by someone thinking they were slaying a sea monster, Freya threatened the gods with revenge for this outrage. There was in fact a happy ending as Od was welcomed into Valhalla even though he had not died in battle. Freya was given permission to visit him in Valhalla, so the two would never be separated.

After you have completed your spellcasting, thank the goddess you have summoned and say goodbye, imagine them leaving and returning to their place, visualize the Divine doorway closing. Breathe deeply and allow yourself to come back into the here and now, finish with the words. “It will be.” This completes your spellcasting. Blow out your candles, incense and fragrant oils. Sit for five minutes to become grounded.

After casting love spells, carry a small rose quartz on your person, it is a way of emitting the love energy to the one you want to bond with. 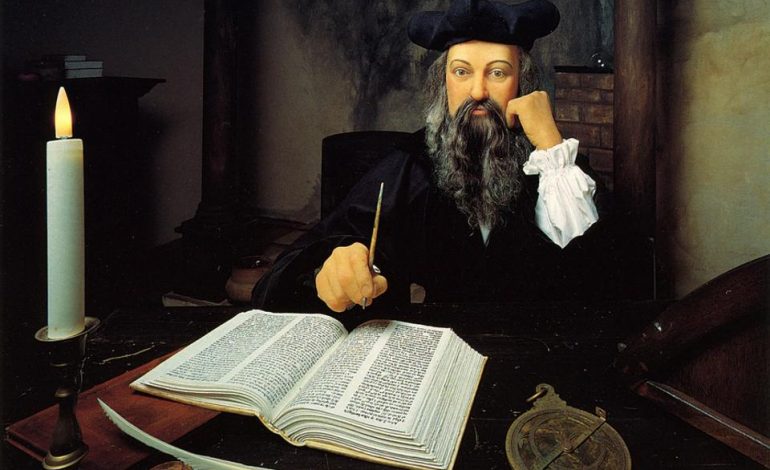 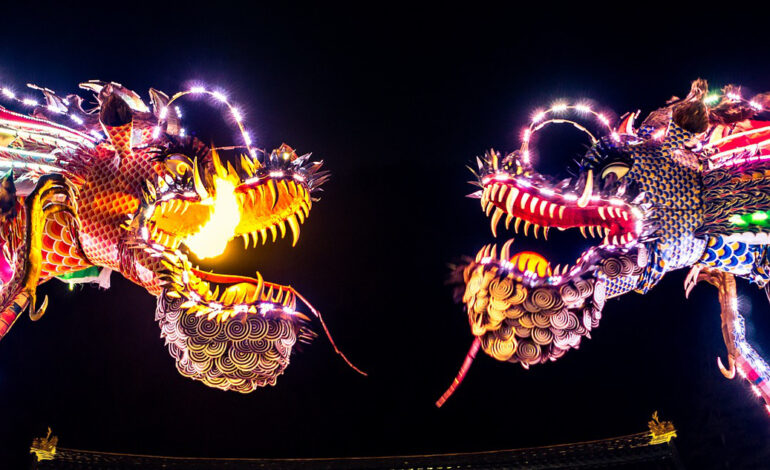 Candle magic is an ancient art and it is the most

Magic wands have been used for centuries by witches to help

Magic is the practice of having an intention and bringing that

Ritual magic can be very quick and simple or elaborate and

The first thing you do when making magic, is to have